Summer Salmon, Grilse and Sea trout start arrive in early June with fresh run fish continuing until the end of the season in mid October.

Grimersta Lodge built in 1861 stands on the shore of East Loch Roag the Atlantic sea loch into which the Grimersta river flows. 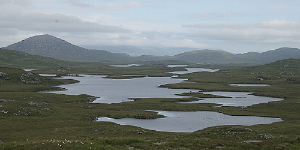 The headwaters of the Langabhat Catchment arise in the glens of North Harris before entering the Atlantic at Grimersta on the Isle of Lewis. 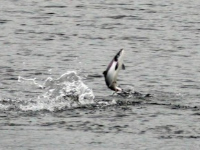 Grimersta is best known as a Grilse fishery although there is a run of spring and summer salmon. Fish in the 15 - 20lb region are taken regularly and in September 2010 a fish estimated at least 32 lbs was caught (and released) in the Kelt Pool, this is believed to be a rod caught record for the Grimersta. Brown trout (Salmo trutta) are found throughout the system and in the many smaller adjoining lochs. Artic char (Salvelinus articus) are also present, most notably in Loch Langavat. 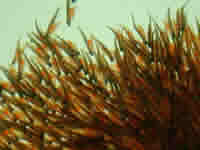 In common with much of the west coast, stocks of Salmon (Salmo salar) and Sea trout (Salmo trutta L.) suffered a decline with the Grimersta rod catch reaching a low point during the late 1990's. Since then, there has been a steady and encouraging recovery with catch returns for the last two seasons being 518 and 474 salmon / grilse. The last three years have also seen an enouraging improvement in Sea trout numbers with catch returns of 389 and 283 Sea trout in Seasons 2011 and 2012.

Nevertheless, there is much work to be done and the conservation policy at Grimersta is aimed at restoring, sustaining and improving the run of fish.

Latest and historical fishing returns information is available on the Grimersta page on Fish Hebrides. 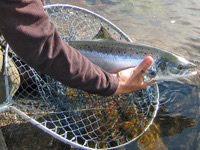 The Special Area of Conservation Management Plan has encouraged the various fisheries and angling clubs with an interest in the Langavat catchment to develop a voluntary agreement to ensure best management practice with the aim of reducing the exploitation of fish stocks.

This includes guidelines for catch and release. At Grimersta we encourage an informed but voluntary approach to catch and release with 85% of salmon and grilse and 100% of Sea trout being released over the last five years.

Gyrodactylus salaris is an extremely dangerous parasite responsible for the destruction of salmon stocks in over 20 rivers in Norway. Gyrodactylus is present in Russia, Finland, Sweden, Germany, France, Spain and Portugal.

It is vital that we take the appropriate bio security precautions to ensure that Gyrodactylus does not enter our rivers — it is Grimersta policy that no one may fish until a Gyrodactylus declaration has been completed. This declaration is available here as a PDF file please read and sign it, and return it to the Estate Office prior to your arrival.